Home
Dating Blog
Professional Dating
The Best Place to Meet Military Men Is At Your Fingertips! 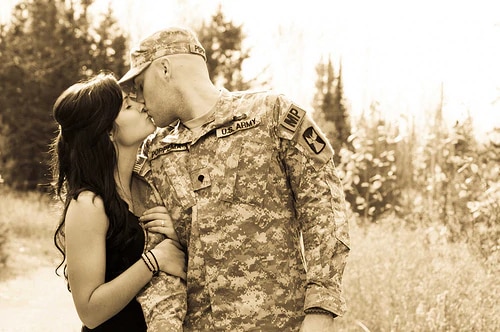 It’s no secret that many men and women want to start dating a military man; how could they not? Military men are strong, courageous, patriotic, and they are worldly (for the most part). Oh and we can’t forget that they look great in their uniforms. What people don’t realize is that one of the best places to meet military men is right at their fingertips.

A dating website is the best place to meet military men because there are just so many out websites out there and so many male members. Let’s put this into perspective, shall we? Where else can you go to potentially meet thousands of eligible military men, short of going to Fort Lee? The internet of course. Uncertain about the type of guy you’ll meet? As with any other means of meeting men, it is a gamble.

A little known fact is that all soldiers are given an Army email account. When you are talking with him, ask him for his army issued email address. It should look like firstname.lastname@mail.mil. No matter what he may say about being on a special mission and cannot provide it, who is he working for, or whatever else… If he doesn’t provide his army email, then he is not a real military man.

While it is exciting to meet a military guy, you have to keep in mind that their time is very limited, especially if they are overseas. If you are able to spend hours on Skype just chatting away, or if you can send him an email and he responds right away — numerous times in a row, then he cannot possibly be who he says he is. The truth of the matter is, he would be too busy doing his job to sit around talking to you, someone who he just met online. If there is anyone he would be spending hours talking to, it would probably be his loved ones…

3. He Asks for Money

This should raise red flags almost immediately. For one thing, the military provides their soldiers with the stuff they need. So if the soldier tries to tell you that he needs money for this and that, chances are they are lying. Oh, and if you are supposed to meet up and he suddenly tells you he needs cash because of XYZ… Don’t fall for it.

While you may have met someone on the website, you may still be wondering if they are really who they say they are. In order to prove it to you, they may send you copies of his ID or pictures of him in his uniform. You will want to believe them, but it would be wise to ask someone who knows about the military to weigh in. Yes, it may sound like an extreme, but when your heart is involved, wouldn’t you rather play it safe?