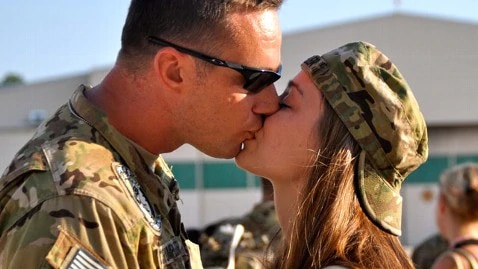 What are some of the things civilians misunderstand about what it means to be in a military marriage.

Here’s the top 10 answers to marry a military

In most situations, couples are told that they should place their marriages above all else. Married military couples rarely do this because to them, their duty comes first and everything is second — even their spouses.

One of the most popular misconceptions about military marriages is that there is a lot of cheating going on by either partner — whether it is by the wife while her husband is deployed, or by the husband with female soldiers while on duty. While it cheating isn’t unheard of, it does happen but not as frequently as one may assume.

Military spouses, male or female, often feel like they have to sacrifice a lot in order to make their marriage work. By doing this, they may feel like they lose a sense of self. What civilians may not understand is that the person who has to sacrifice their career goals do so willingly and they understand that it is not a permanent situation, as their spouse will retire and they can resume their career path.

Sometimes when a spouse tries to get a job and they learn they are married to a military, the employer will be more interested in the vet. This happened to a woman from San Diego, California. She shared her story of looking for work since 2011 and has not had a single interview. Instead, when employers learn about her husband, who retired from the Navy in 2010, they ask that he be the one to interview.

Because of the very nature of their career and the possibility of being deployed or stationed somewhere else, they can never make plans — whether it is a vacation, birthday party for their children, or family reunions. This inability to make plans can put a strain on the marriage.

There is always a possibility that when your spouse is deployed, they may get hurt or killed while serving their country. This very fact can weigh heavily on the spouse at home. Some find it easier dealing with this by thinking about how to maintain their daily lives — day care, work activities, school activities for the children, anything that can be a distraction.

You often see in the movies a happy homecoming where the family is waiting for their loved one to rush into their arms. Of course, this happens when the families are reunited, but what these shows don’t show you is what happens when they go home. Everyone has to reacquaint themselves with the person who returned home, and they have to readjust to civilian life. This transition, combined with what trauma they may have experienced while deployed, is not easy to deal with.

The military as a whole is usually perceived as being close minded and overly traditional; however, when it comes to marriages, it exposes people to different cultures and ethnic backgrounds. Some believe that if it weren’t for the military, they would not meet their spouse who is of a different race/ethnicity/religion/etc.

For regular couples, it is common to share stories about their day with one another. Unfortunately, military couples do not have that luxury, which can be a heavy cross to bear. It leaves you feeling isolated from each other and it can put a strain on the relationship.

Deployments, strange work schedules, and frequent relocations often put stress on a marriage, which can test the couple. However thanks to a variety of coping mechanisms the couple may use, the pride they feel toward their spouses service, and respect, they are likely to weather the hurdles and they tend to be stronger because of it.