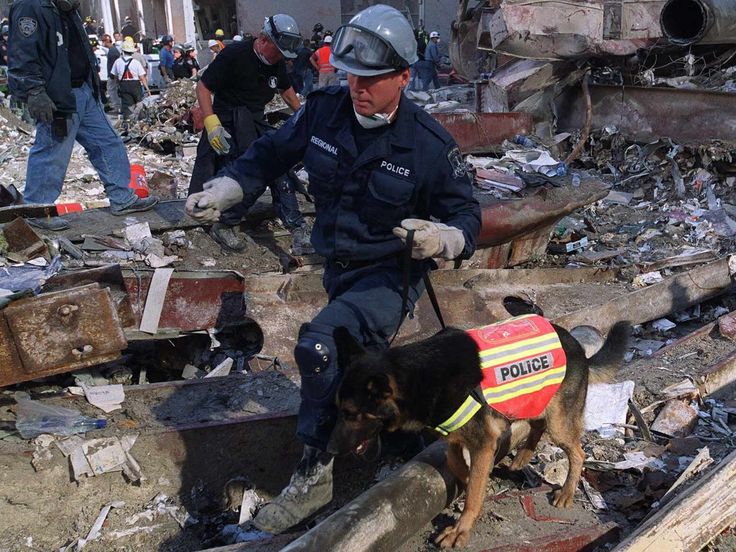 Forget being man’s best friend, dogs can go above and beyond the call of duty—sometimes even saving some lives, even if it means sacrificing their own lives.

Trakr had a pretty successful career in Halifax, Nova Scotia, where he sniffed out more than $1 million in contraband before retiring in 2001. But what really marked his career was what happened months later. When the September 11th terrorist attacks took place, his trainer, Canadian police officer James Symington, drove down to New York City with Trakr to help with recovery efforts. Trakr managed to find the last survivor of 9/11 under the rubble. After two days of hard work, he collapsed from exhaustion and smoke inhalation and returned to Canada.
Although he suffered from a degenerative neurological disorder that was mostly caused from 9/11, he lived to the age of 14, dying in 2009. Through the miracle of science, he still lives on. Symington entered Trakr’s DNA into a cloning contest and won, producing five little Trakrs who have big shoes to fill.

2. Lucas: The pup who saved his officer from being ambushed.

On May 18, 2015, trouble started when Mississippi Deputy Todd Frazier pulled over at a deserted rest stop to check on a suspicious vehicle. All of the sudden, he was ambushed by three men, one cutting him across the forehead with a razor, one choking him, and the other dragging him into the woods by his legs. Despite the attacks, Frazier managed to hit a button that released his K-9 partner, Lucas, from the car. The dog acted quickly, sinking his teeth into the attackers and successfully chasing them away.
Lucas came out of the fight covered in blood, with a torn ligament and broken teeth. However, neither he nor Frazier has any serious injuries, thanks to his heroic actions.

3. Sergeant Stubby: The pooch who caught a German spy.

While doing combat training in the fields of Yale University in 1917, Private J. Robert Conroy came across a puppy with a short tail. He rightfully named the pup ‘Stubby’ and brought him back to camp where Stubby became the soldiers’ mascot. He proved to be a clever dog. Not only could he salute, but he could recognize bugle calls and marching routines. He was smuggled into a ship and went off to war, where he would prove to be extremely useful. His sensitive nose was able to sniff out poisonous gas and his good hearing allowed him to warn his crew of incoming artillery shells.

While in the trenches, he learned to distinguish the difference between German and English speaking soldiers, and when locating a wounded English-speaking soldier, he would bark for help. This skill even allowed him to catch a German spy. The man made the mistake of speaking to him in German, causing Stubby to attack and hold him down until American Soldiers captured him. This earned him the rank of Sergeant, and he became the most decorated dog of WWI.