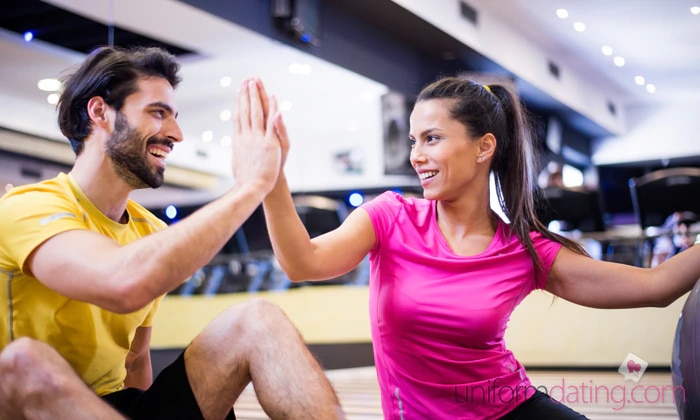 Contrary to what you may believe, the gym isn’t a place of torture and dread, it can be a fantastic place to meet single men who are just itching to show off their powerful bodies; after all, they aren’t working out for nothing!

If you’ve tried your luck with blind dates, speed dating, being set up by a friend, or even online dating, and these methods haven’t worked for you, perhaps you just need to open your eyes and see what’s right in front of you. You may be surprised to learn that there have been quite a few ladies who have gone on to marry the hunk in front of that set of free weights and here’s how you can do it too.

A lot of the clothing for exercising doesn’t leave a whole lot to the imagination, as it is designed to help keep you cool; however, with that said, you don’t want to wear clothing that shows off too much skin.

For example, you’ve probably seen women who wear bralettes that show off entirely too much cleavage or shorts that are so short that there isn’t much there.

Do wear something attractive.

Although you shouldn’t wear something ultra-revealing, you also don’t want to wear anything that should go in the recycling bin. So even though you feel most comfortable working out in a pair of sweatpants and an oversized t-shirt, you might want to refrain.

Don’t change your schedule to coincide with his.

We’ve all been there when we had to deal with a busy schedule and so we had to go to the gym whenever we could. This means you may have run into a random cute guy who caught your eye. You don’t want to change your schedule to match his because he may think you’re a creepy stalker.

Do finish your workouts as normal.

When someone does catch your eye when you work out, you don’t want to change your schedule too much. You’re working out for you, not to catch his attention. So if that means you rarely see each other, so be it. It only adds to the mystery!

Don’t stare at him all the time.

If you’re attracted to him, you’re going to stare at him every once in a while, but you should make it obvious that you’re watching him. You know yourself how uncomfortable it can be being checked out by random people, so imagine how he must feel. Sure, some guys love the attention, but most of them aren’t so keen on being watched.

Do let him know you’ve noticed him.

While staring at him is one way of letting him know you’ve noticed him, you can also do other things to let him know. For one, smile when you cross his path or if you catch his eye in the mirror. If you do this a few times, you can try engaging in small talk and make an introduction.

Meeting a guy at the gym isn’t so far-fetched of an idea, but with these tips, it’ll be much easier.