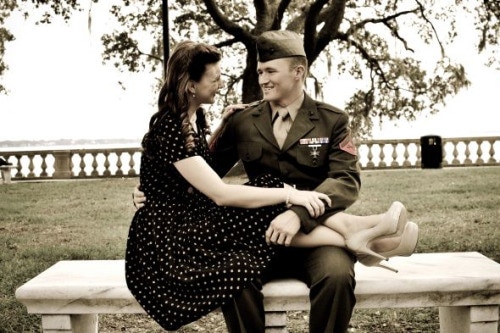 Stories from inside the military can be enlightening to the outside world about how things really work, but they can also serve as a call to action.

This is especially true for boys who want to become men.

Do not get us wrong, we are fully aware that not everyone is going to head down to their Marine recruiter to sign up, nor is it a good idea that just any guy to sign up. But, if you’re one of those boys who wants to have a sense of purpose, maybe you might want to keep reading because this is the story of one man, Jeff Edwards, who joined the Marines.

Jeff Edwards is a United State Marine and has been for twelve years now. He joined the Marines when he was 17 years old (he actually turned 18 while at boot camp).
Now, his boyhood status was further cemented by the fact that he looked like a boy. You know those 17-year-old football stars that seemed destined for Special Forces? Well, he was the soft baby-faced kid who rarely had to shave. He was short and weighed in at a whopping 130 pounds. In fact, to this day he can still hear the screams of the drill instructors yelling to me, “Boy does your momma know you are here?” He says that, at the time, he looked 12 and could have been. However, he watched the Marines defeat a fire dragon with a sword in 1997, and this boy was determined to be a man.

Intimidation is for Boys

Many potential Marines could easily fall into the trap of being intimidated by the concept of being a Marine. Now, if you wanted to become a Marine and were intimidated out of it, then that is probably for the best, and this is the first line of screening. There are many stories that a Marine hopeful will often start with, “I was going to join the Marines but…” then just plug in whatever excuse you imagine. Some are legitimate, but most end with something laughable.

However, if you find yourself a boy and you have the courage to enter a world of men, then congratulations, you have taken the first step towards manhood. Again, that was where Jeff was. No one could have pictured that 17-year-old Jeff was destined to be Marine. However, that is why it must have been so in his future. He knew he was joining the world well above his current capacities, and he threw myself headlong into it. And, he will tell you that apart from his faith which he holds dear, it was the single most pivotal decision of his life. Intimidation is for boys ladies and gentlemen, and certainly not for Marines.

If you ask Jeff if he would do it again, he would. He has no regrets about joining the Marines, although the transformation was a long process. He does want you to remember that although you may be 18 and legally an adult, that doesn’t make you a man. It’s a frame of mind, and the Marines (or any military service) can help you achieve the manhood you’re looking to achieve.