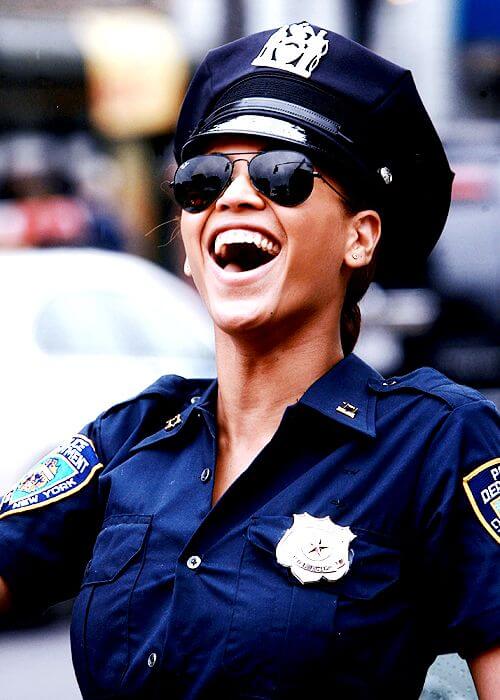 The next time you are invited to attend a function with a police officer, use these jokes to break the ice.

1. A guy went to the police station so he could talk to the burglar who broke into his house the night before.
“You’ll get your chance to confront him in court,” the desk sergeant said.
“No, no, I just want to know how he was able to sneak into the house without waking the wife. I always get caught!”

2. For years, a man was looking for a way to make his wife drive a little more carefully. One day, it dawned on him. He turned to his wife and said, “Love, if you get into an accident, the police will find out your real age!”

3. A man and his wife were for a drive down the highway when they saw the patrol car with its lights on behind them.
When they pulled over, and the officer walked up to the window and said, “I’m giving you two tickets. One of them is because you were speeding and another because you didn’t have your seat-belt on.”
The man said, “I did have my seat-belt buckled. I just unbuckled it when you walked up to the window.”
The cop turned to the man’s wife and said, “I know he didn’t have his seat-belt on. Am I right, Ma’am?”
She replied, “Well, officer. I learned years ago that I shouldn’t argue with my husband when he’s drunk.”

4. Cop on the horse said to a little girl on a bike, “Did Santa get you that?”
“Yes, he did,” replied the girl.
“Well you should ask him to get you a reflector for it next year!” and fined her $5.
The little girl looked up at the cop and asked, “Nice horse you’ve got there, sir. Did Santa bring you that?”
The cop chuckled and replied, “He sure did!”
“Well, next year tell Santa that the d*ck goes under the horse, not on top of it!”

5. Little Bobby’s kindergarten class went on a field trip to their local police station. While there, they saw pictures posted on a bulletin board of the 10 most wanted criminals from the state.
One of the kids pointed to a mugshot and asked if that person really was a wanted person.
“Why, yes he is,” said the office. “We want to catch him pretty badly.”
Little Bobby asked the officer, “Why didn’t you keep him locked up when you took the picture?”

6. A cop had a perfect spot to watch for speeding drivers but wasn’t getting many.
Then, he discovered the problem; a 10-year-old boy was standing up the road with a hand painted sign which read, “SPEED TRAP UP AHEAD.”
The officer then found a young accomplice down the road with a sign painted “TIPS” and a bucket of change.

Try your luck dating a police officer on Uniformdating.com!