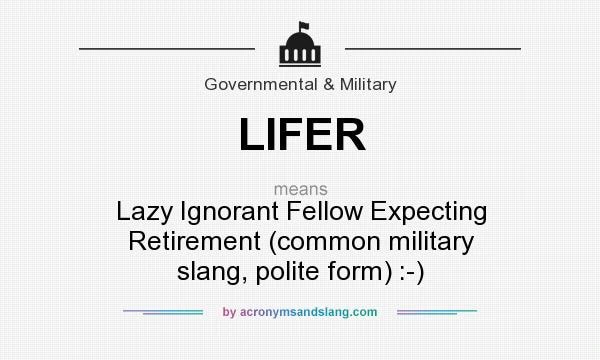 The military is known for having more hi-tech gadgets than anyone could count, plus a seemingly endless amount of money to spend on these things. Another thing that the military have an abundance of is slang terms. Some of the slang comes from the endless supply of acronyms, some is from the phonetic alphabet, and others are just… Crazy.

It would be so time-consuming to jot down and explain every single slang term that is being used in the military. Here’s just a tiny glimpse at some of the most favorite terms. These are favorites because of what they stand for, how senseless they are, and there might be one about incontinence.

2. Blue Falcon – Blue Falcon isn’t just a cartoon from when you were young. It actually means someone who screwed someone (most likely a friend or a comrade) for their own benefit. These types of people are especially looked down upon because come on, you’re supposed to look out for one another!

3. Brown Star Cluster – We’re going to let you think about this one for a minute. Now that you’ve thought about what it means, you’re absolutely right. It has everything to do with poop. Well, it’s actually a metaphor for it. Military people use this term when everything goes incredibly wrong in a situation, and you’re pooping your pants. Well, we suppose that depending on the circumstance, it could be literal too.

5. ENDEX – This acronym might not make sense to a lot of people, but once you hear what it means, you might start using it yourself. ENDEX is short for “end of the exercise.” We all know that military people go through extensive exercise routines, so when they get the all clear that exercise time is over, just imagine that sweet relief they must feel.

6. Fobbit – So, are you catching the J.R.R. Tolkien reference with this one? You totally should! Anyway, a fobbit is someone that is deploy, but you never see them leaving their forward operating base (FOB).

7. Go-Fasters – You would imagine that this term is about pushing your limit and going faster, right? Well, in the beginning, that was what it was supposed to mean. However, a lot of people started using it to describe any sort of footwear that wasn’t a part of the standard uniform. Sure, “shoes” are simple enough to say, but “go-fasters” makes getting yelled at less mean.

8. Ink Stick – Yep. This is exactly what it sounds like. It’s a pen. For some reason, military folk likes to make up crazy slang terms for even the simplest of words. Words like “pen.”

9. Moonbeam – A moonbeam is a fanciful way of saying a flashlight. It might not seem like much, but it certainly adds a bit of romanticism to the whole situation of being deployed in some strange place.

10. OFP – OFP is an acronym for “own fucking program.” What does it mean exactly? It just means that when you’re done being a soldier during the day, you can do whatever you want (within reason of course) by night. This is your chance to be yourself and live a little.

11. Quiet Squirrel – This term is used to describe someone who is working with a high-speed unit or in intelligence. This tends to be thrown around to describe wannabes, but it can be used to tease the actual people. It’s just a fun way to tease playfully people who have more interesting jobs than you without being too much of a jerk.