Have you ever watched those touching videos on YouTube where a soldier comes home from a tour and his girlfriend is in hysterics because she is so overjoyed to see him? Who knows how many months (or even years) it has been since the two has last seen each other. The relationship someone has with a soldier is unique and you should be aware of what to expect when you find that special. 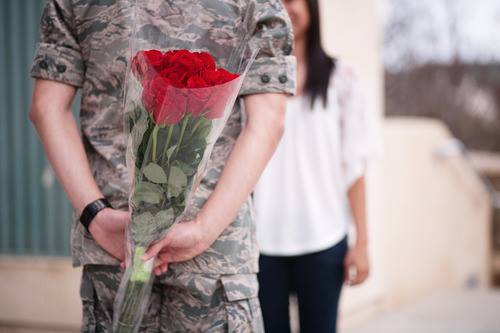 Here are some of the things you should know going into a relationship with a soldier.

The men (and women) who join the military and devote their time and lives to serving their country, live by a code of honor that many people do not. You will find these people are patriotic to the core and they have different beliefs and values than the average citizen. After all, they are willing to sacrifice their life for their country. Respect and manners are very important to them, so don’t be surprised if he expects others to treat him with same courtesy he affords them.

2. Deployment can be a drag.

Until your man retires from service, be ready for him to be deployed at any given time. While the chances of him being deployed more than once is not too common, it is also a possibility. You have to be ready to accept that he will not be around for some time and it could be days or weeks until you hear from him. When he is deployed, you will want to use technology to your advantage in order to stay in touch. Skype, email, and instant messaging will be your best friend.

For a soldier who has seen combat, some things are just not worth the headache. When you stress about a broken shoe or a co-worker gossiping about you to your colleagues, he may not offer you much in the way of sympathy. You have to remember; he has seen some gruesome stuff and come out alive. Although this stuff may ruin your day, it will seem like petty nuisances to him.

The internet is a blessing and a curse for the deployed soldier. They have plenty of social media outlets that enables them to keep in touch with their loved ones; so, when it comes to having a real conversation in person with someone that is not a fellow soldier, it may be a little difficult to have a sincere conversation with him. Instead of getting annoyed because he does not want to have deep conversations with you, just be patient. With a little time, he may become a talkative fella who will pour his heart out to you… Maybe.

5. Maturity and independence is important to him.

The guy has been through some tough situations that most people couldn’t handle. These things will make him grow up (usually) and become a much wiser man than most non-soldiers the same age. He has been trained to take care of himself in any situation, so when you are dating a soldier, you can rest assured that he can handle his own. Plus, since they are honor bound, he may even be more than willing to help you out if he can.