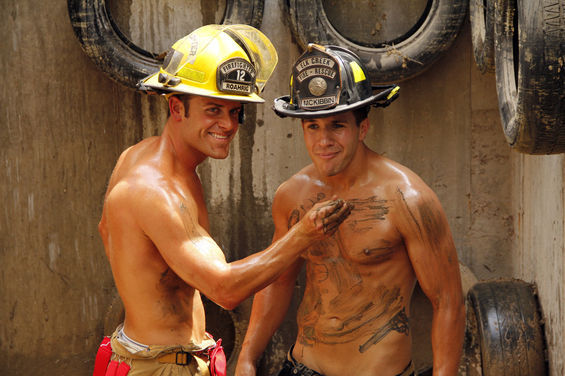 Out of all the men who have to wear a uniform for their job, women seem to go absolutely bonkers for a sexy firefighter. Can you blame them? They have to be in shape, they are incredibly brave (they have to be brave in order to risk their lives every day!), and they are local heroes. But did you know there is an actual science behind it? Don’t believe us? Continue reading to find out more!

1. Muscles in All The Right Places

Nothing says protection like a pair of big, strong arms wrapped around you. A scientific study shows that women are naturally drawn to men whose shoulder-to-waist ratio is somewhere around 161% (men gravitate to women who’s hip-to-waist ratio is about 70%). Because of the nature of their profession, firefighters tend to do a lot of heavy lifting, thus building muscle in their shoulders and arms.

2. They Are Local Heroes

Growing up, many young girls dream of their knight in shining armor or that Prince Charming to sweep them off their feet. Firefighters are selfless, brave, heroic, and just down right awe-inspiring. Since they put their lives on the line every day when they go to work, they tend to have a different kind of respect from townsfolk than your average Joe. There have been numerous studies conducted by psychologists that have proven that women are drawn to men who have some kind of clout within their community.

As we mentioned before, women cannot seem to turn down a man in uniform—unless there is something seriously creepy about the guy. Experts believe that one of the reasons the uniform is such a big attraction is because it shows commitment and dependability. These traits send off a signal to the woman that “hey, this dude just may be a kick ass father and provider.” Sorry to burst your bubble, guy at Starbucks, a study conducted by the University of Toledo has shown that the type of uniform matters greatly.

Can you think of how many fairy tales where the prince came in and saved the damsel in distress? Even the most independent woman has this desire—even if she refuses to admit it. Since the women’s rights movement, women have tried to shrug off the dependence on men. While there is nothing wrong with that (Girl Power!), sometimes it is nice to be saved; and who better to come to the rescue than a handsome firefighter? Yeah, we can’t think of any either.

Men have Sports Illustrated and Playboy. Women have their firefighter calendars. There is no denying that the men that grace the pages of the calendar are fantastic specimens of the male form. Their ripped bodies show that the men take incredibly good care of themselves and they have to in order to do their jobs.