Home
Dating Blog
Professional Dating
The Good, Bad, and Nasty Sides of Being a Woman in the Military 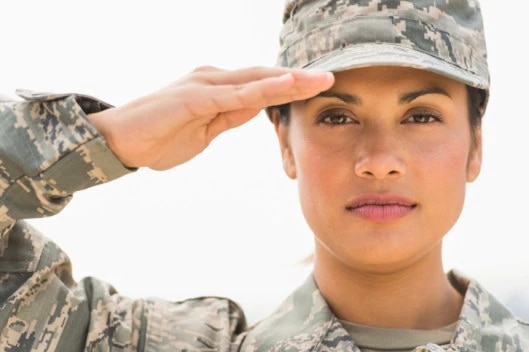 When you hear people talking about a military experience, it’s usually coming from the male perspective. Life for a woman who is in the military isn’t quite the same.

In this article, we’ll share the stories of three women which will shed some light on the good, the bad, and the darker truths women encounter while they try to serve their country.

The Good
Caitlyn W., 28, had been dating her boyfriend for several years before she decided that she wanted to join the military. Just two weeks before she was to go to basic training, she was dumped because he couldn’t handle her choice to be in the military. However, the day she was supposed to leave, he contacted her and begged her to take him back. Instead of being willing to take him back, she said they could write while she was away. This would give her time to think about it.

Caitlyn was forced to ask herself what kind of woman she wanted to be, the strong and confident woman or someone who allows men to come and go from the relationship whenever it suited him. Naturally, she chose the former.

The Bad
Megan L., 32, tells us that not everything is so illuminating in the Army. According to Megan, the military isn’t entirely on the female member train yet. She tells us that much of the equipment isn’t suitable for the smaller female frames. For example, the boots aren’t available in female sizes and the one company that does make them doesn’t think it’s worth the effort to make boots in the new color.

She also says the rucksacks they carry aren’t made for a woman’s body. Usually, the plastic frame will go past a female soldier’s hips and be wider than her shoulders.
The body armor is a whole other issue. The armor they use is designed for a man, although it is supposed to be unisex. Many women complain that the armor doesn’t fit right and leaves much of the vital areas exposed. There have been smaller uniforms made, but there is still much more that needs to be done.

Plus on top of all of that, there are some women in the military who will try to use their appearance or make-believe weakness to get people to help them. Megan says that these women are the ones that make military life hard for the rest of the women because they are all under close scrutiny, thanks to them.

The Nasty
K.C., 30 – When a woman moves up the line of command and becomes an infantry officer, it isn’t always taken so well by the guys. Wherever you go, you’re going to have that cloud of hostility following behind you. Just when you think you can let your guard down and breathe just a little easier, someone gives you a hard time.

Being a woman in the military means that you are going to be put under a microscope, invalidated, and second-guessed. People are going to say that it is your gender, and you’ve used it to your advantage—that’s why you’re succeeding. When someone tries to go against the grain and question why women are treated differently, you never get a real response other than, “It’s just the way it is,” or some other sad excuse.

K.C decided that she wasn’t okay with this and that she was going to take a stand. How did she do that? By working her tail off to become an officer. She hopes that men and women will continue to push the boundaries and make it known that it’s not okay to treat women differently, be it to help her or hurt her.