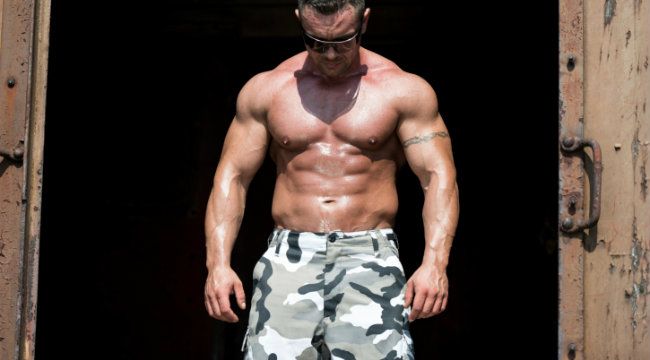 There is no denying that military men have that… Something that just drives the women wild. The average Joe will be quick to say that it is just the uniform (a uniform that muscular military men fill out so well, mind you), but it goes so much deeper than that.
Here are just some of the things that contribute to their irresistibility. Interestingly enough, these qualities are things that the average Joe can offer if he really wanted to.

When a man signs up for the military, he is devoting a portion of his life, if not his entire life, to protecting and serving his country. He is willing to go anywhere in the world his country requires of him, and although he may not like it, he will do it. Not only is he loyal to his country, but he is loyal to those who he is close with, be it their brothers at arms, family, friends, country, or his girlfriend/wife.

Even though they may not have left the country or gone to college, a man in the military is well informed about what is going on in the world. Unlike most people, they follow the news because they have to. They have to be well versed in what is going on in Russia and what Middle Eastern country poses a greater threat. Would you be surprised to learn that social media and dating articles like this one receives more hits than any global news article? It’s kind of sad to think about it that way, isn’t it?

3. Priorities Are In Order

Being a military man isn’t easy, especially when there is so much you want to do and not knowing how much time you have until you are deployed. Because of this, you won’t see that muscular military man sitting on the couch while there is a list of things you both wanted to do. No, instead of talking about things, they are more likely going to go out and do them, especially if it is important to them.

Unfortunately there are instances where people will simply disappear from your life, especially when things have run their course and they no longer want to hang out. It’s just a sad reality when you are dating civilians. However, when you are dating someone in the military and they no longer want to hang out or they don’t want to go to that dinner at the parents, instead of flaking and pulling a disappearing act, they will be real with you and tell you. You never have to wonder where you stand with a military man because they don’t have time for mind games.