Home
Dating Blog
Date Ideas
What Uniformed Hottie Is the Most Desirable in the UK?

When it comes to snagging yourself someone who has a career where they wear a spiffy uniform, it might be a little harder than you think — especially if you go for those professionals that are highly sought after. 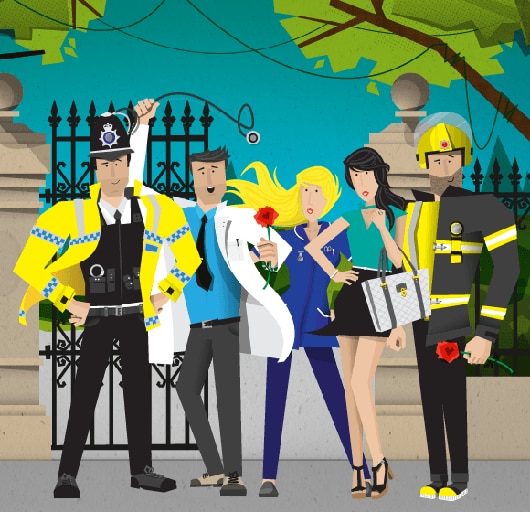 When we asked the people around the country what unformed professional did they want to date the most, it is no surprise that 21 percent said they wanted a doctor. How could you not want to date a doctor though? Clearly, they are incredibly intelligent (going through med school is no easy task and certainly is not for dummies!) and they want to help people. Let us not forget that they make great money. The only caveat of dating a doctor is the hours. You will experience some (or a lot) of nights alone because they are on call — that is if they work in the hospital.

At the other end of the spectrum, only 9 percent said they would want to date someone in the military. Although it is understandable, military folk need love too! They are the heroes that fight to protect the country whenever there is a threat. They make the ultimate sacrifice — a sacrifice not many are willing to take. It is because of that sacrifice and the willingness to risk their lives, people are reluctant to form a long lasting relationship with a service person.

Desirable Professions by Gender
We’ve broken down the numbers even further to give you a better look at what profession is desired by whom.
It appears that both genders would like to date someone in the medical field, as 61 percent of men said they want to date a nurse and 35 percent said they wanted to date a doctor, while 50 percent of women said they’ve dreamed of dating a doctor. Hey, you can’t blame them — everyone wants to be with someone that they know can take care of them should something go wrong. What better person to look after you than someone in the medical field?
Although nurses and doctors were top of the list, firefighter and law enforcement were ranked pretty evenly among women; 43 percent and 42 percent, respectively. 34 percent of men said they’d like to date a stewardess.

Desirable Professions by Age
In our quest to find out what profession is most desirable among singles, we sorted the information even further and broke it down by age group. All across the board, doctors and nurses held the first two slots of who they’d want to date. From the 18 to 34 age range, the third most desired profession was a police officer.
In the 35 to 44 age group, people seem to forget our home-side heroes, the police officer though. The people now start lusting after firefighters. Like a moth to a flame, this 10 percent of this age group is drawn to firefighters and their acts of bravery.
It is only when we hit the 45 and up age groups that we see military folk become more desirable. After years of service, these men and women are finally getting the recognition they deserve in the love department.