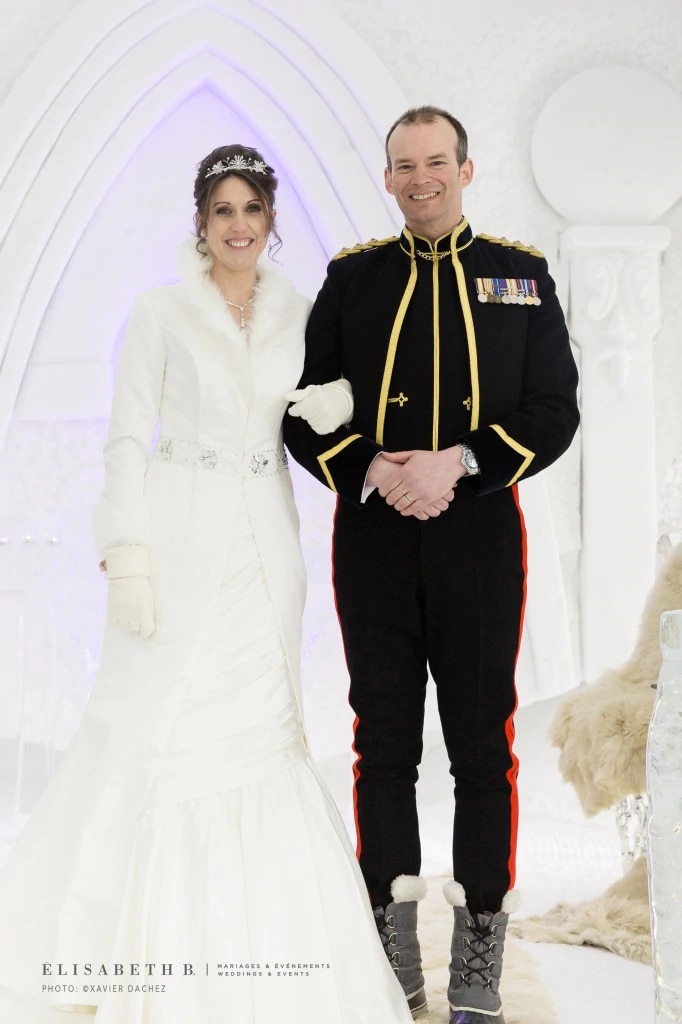 Katherine Tilbrook joined uniformdating.com dating website that is geared toward helping singles fall in love with people who work in a profession where they have to wear a uniform.

It was here that she found her true love when she met Army Captain, Austin Hind. The pair met in England, but they now live in Medicine Hat, Alberta, Canada. They pledged their love for one another at the Hotel de Glace in Quebec in the beautiful winter wonderland known as the ICE ceremony.

Meeting ‘The One.’
The pair met online through a popular dating website, and while you may want to believe it was love at first site, Katherine shares that they were more nervous than anything. The two had been talking on the phone and over email for a while before deciding to meet up at his home in Winchester, UK. They were going to go for a walk together, but when the door opened, they were much more nervous and even excited, rather than the whole “love at first sight” fairy tale beginning.

The Proposal
Austin proposed to Katherine in Medicine Hat, Canada at the World’s Biggest Tee Pee (the teepee was initially at the Calgary Olympics, but it had been transported to Medicine Hat) on a freezing day in December. He wanted to make it special by proposing in the snow because their first date took place in the snow. Although it was a frigid -18 degrees, he managed to drop to one knee in the center of the teepee. Katherine hadn’t been expecting the proposal because they had to travel to Calgary to pick up Austin’s sister, but instead they went the opposite direction from the airport and arrived at the teepee instead.

All About the Location
The couple lived in the UK but relocated to Canada due to Austin’s posting orders. The couple loved Canada, and they preferred to wed there instead of the UK. They chose the Hotel de Glace because it was a lovely location and it fit their lifestyle and even their backstory. Snow and ice had been a significant factor throughout their courtship, so it seemed like a perfectly logical thing to incorporate it into their wedding somehow; the couple’s first date included being snowed in without electricity while still in Winchester, UK. One of the last times they had together before Austin was relocated to Afghanistan, they went to the Ice Bar in London, and then he proposed in the snowy teepee. So naturally getting married in an igloo or an Ice Chapel seemed like it was a perfect solution.

The Preparations
The wedding planner at the Hotel de Glace helped the couple arrange their ceremony. Though they were in the country, they were hundreds of miles away from the venue. The wedding planner was able to recommend accommodations and flights, which the couple made themselves. The planner worked hard to make sure the wedding itself went off perfectly, much to the couple’s relief.

The Guests
There weren’t very many people who attended the couple’s wedding. There were seven people, including Katherine and Austin, in attendance: Katherine’s parents flew in from the UK, two friends from Medicine Hat attended, and her cousin from Florida came too. They all stayed at the Sheraton Four Points Hotel, located in Quebec. They wanted their siblings and Austin’s parents to be there to witness their big day, but due to the distance, they couldn’t be there.

The Look
Katherine bought her beautiful wedding gown at a bridal shop in Medicine Hat called Magic Moments. The gown was created by Alfred Angelo, and the design was based on Disney’s princess, Ariel. The idea behind the dress was the moment when she meets Prince Eric and is determined to swim the Seven Seas so she can be with him.
The overall theme of the wedding was ice and snow, so the belt of her dress, her tiara, and bracelet featured snowflakes, She donned a long coat that was accented by a fur trimmed collar and cuffs, which came in handy because the chapel at the Ice Hotel was a chilly -5 Degrees. You can be certain Katherine wasn’t wearing sparkly heels, though! She was wearing white moon boots that had been sparked up to fit the occasion.

Creating Magic
Katherine looks back on the day in amazement and feels that the day was truly magical, from start to finish. The most important part, to her, was becoming Mrs. Hind. The day was perfect—the weather, the location, everyone’s kindness, and the way everyone made her feel so special.

The Honeymoon
The couple had three honeymoons of sorts. They stayed overnight at the Hotel de Glace where they slept on beds of ice. They then went to the mountains in Quebec where they spent the night in a charming Bed and Breakfast. Then they spent three weeks in the summer driving from Alberta to Alaska, stopping now and then to camp along the way.