Home
Dating Blog
Professional Dating
My, Oh My, Where Can I Get a Navy Guy?

So maybe you’ve heard that Navy men are considered the cream of the crop when it comes to military men. We won’t deny that all military fellas are pretty hot, but there is something especially attractive about a man decked out in their pristine white uniform — especially if they are coming to sweep you off your feet! 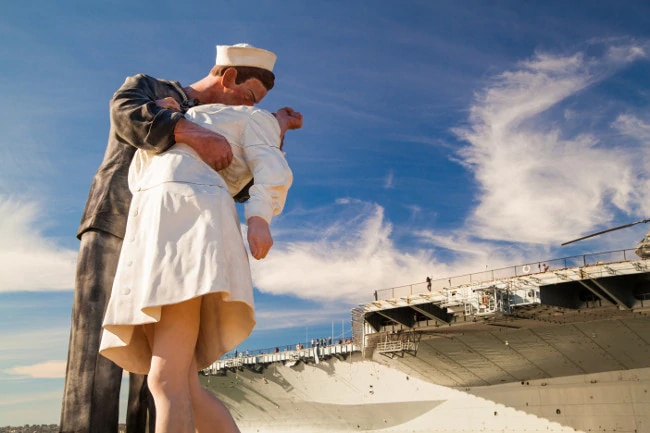 If you are lucky enough to have a navy guy that you’re interested in, there are some things that you will definitely want to keep in mind before you take the plunge and ask to be their special someone. You probably already know that a Navy guy isn’t like the average guy that you’re used to dating. Here are five crucial things you should know about dating a guy in the Navy.

As a general rule, guys tend not to care about the inane trivial stuff that women allow to affect them. You know what we’re talking about, Sally totally showed up to the party wearing the same dress, your stylist dyed your hair the wrong shade of red, or if your best friend was caught cheating on her husband. He won’t care. You have to figure that he is serving in the Navy and he has a lot bigger things to worry about. We aren’t saying that all Naval guys will not care about your troubles — we are just saying that unless it is a serious problem, go to your friends for support.

You have to be completely aware that you are dating someone who will get deployed and you will not see each other for long periods of time. You have to be aware that there is a very high chance that he could get hurt in the line of duty (especially during War time) and that he could very well get killed. You cannot get mad at him when he tells you he is going to be deployed during the holidays. There are going to be times when you wonder what you were thinking by dating a Navy guy… But you have to remember that you are not alone in this. Millions of others are going through the exact same thing and you can find solace while your guy is away by making friends with other military spouses.

One of the hardest things women have to get used to when dating a Navy guy (especially if this is her first one), is that this is a way of life. There are going to be times when they are called to set sail immediately. They are going to have to drop everything and report to the harbor. As mentioned before, when they set sail, there is no determined amount of time. There is no schedule nor is there any designated time frame. It is not a 9-5 job—it is their life.

4. Over Confidence that Boarders Arrogance

Women love a confident man, there is no doubt about that. Navy men tend to take it a bit further and their cockiness can be considered as arrogance by some. This isn’t necessarily a bad thing of course. They work very hard to be a member of the Navy — both intellectually and physically. They know they are pretty bad ass and they do not hesitate to let you (and everyone else) know.

If you are the type of person who needs plans that are set in stone for the future, perhaps you may want to rethink dating a Navy man. Because their job requires them to pick up and go at a moment’s notice, those plans that you’ve laid are will probably get ruined at one point or another.

Dating a Navy guy can be an exciting experience and if everything works out, you could be the person he looks forward to coming home to after every deployment. With patience, time, and a good support system, you will find that your relationship with a Navy guy can be fulfilling and exciting.